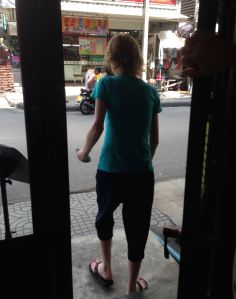 Death’s shadow loomed over Yana, sucking the life from her emaciated body. We had been acquainted with Yana, a tall blond Central Asian, for a couple years, and we were increasingly concerned, but Yana mostly kept to herself. One night on a routine visit, Lionel, the manager of the brothel, pulled us aside to ask for help. He had felt sorry for Yana and had been giving her $10 a day for the past two years so she could eat. He too, saw death’s shadow and wanted us to talk with her and help her go home.

Lionel called Yana over to talk with us. She greeted us reservedly and glared at him. “Don’t be angry with me. I just want to help,” he said. We offered assistance, but Yana wasn’t ready to open up. She did agree, however to come see a doctor at our medical clinic. When the doctor saw Yana, she warned us the symptoms were similar to the woman who died of AIDS a few months before. Yana however, refused HIV testing. She just wanted medicine to help her eat. She clearly didn’t trust anyone yet.

With each visit to the brothel, we watched the shadow of death encroaching in her body. As we reached out to her, she began to let us in. One night,Yana got scared and called to say she was ready to get tested. The results were no surprise to us, but Yana fought back tears at what sounded like a death sentence. “It’s time to go home,” we told Yana, but she said she could not go home empty-handed after being gone 4 years. With death knocking, she felt a sense of urgency to make some money before going home to her elderly mother.

One afternoon, my colleague Beng, and I went to warn Yana that if she did not take her medicine she would die. Yana’s eyes were sad when she looked up and said, “Yes, I know. I want to go home now. Will you help me?” We were relieved, but knew there was only a short window of time before she would be too sick to fly. Yana had already overstayed her visa 2 years. The normal procedure would require a three-day stay in the over-crowded and dirty immigration detention center. She would have to pay a fine in court, and then wait her turn to be deported. The stressful process often took months and the shadow of death would gain ground in a severely compromised immunity.

Beng went to work immediately, contacting immigration officials, getting medical reports, talking with the consulate, and arranging with the airlines. The officials agreed to bypass the usual deportation requirements and one month later, the team took a weak, but grateful, Yana to the airport. They prayed as she waved goodbye from her wheelchair and passed through immigration. An organization in her home country waited to follow up with her and help her get the medical care she needs to recover.

Yana’s name was nearly added to the death toll of foreigners in Thailand. Her situation represents thousands of unseen women stranded in foreign countries. Even if they get the money for a ticket, they don’t know how to navigate the complicated channels of immigration. Sometimes they are arrested for illegal entry or prostitution and wait in detention until their families can borrow money to get them home. When their health is compromised these vulnerable women are even more desperate and afraid. If they cannot get home, they are at risk of dying alone in a foreign country.

God intervened for Yana and we were able to assist her before she lost all hope of life. A couple days after Yana left, her mother called to thank us for returning her daughter. She had lost her son to death and was grateful to get her daughter back. Yana can now fight this illness, encouraged by her mother’s love, and with hope for a full life.

“The people who walked in darkness have seen a great light. Those who lived in the land of the shadow of death, on them the light has shined.” (Isaiah 9:2 WEB)

Your prayers and support enable NightLight’s outreach team to shine a light of hope into the darkness and to rescue women from the shadows of hopelessness and death. Your support is a lifesaver to each of the beautiful women we meet in the brothels, bars, and streets here in Bangkok.

← Are You the Ones Who Help the African Ladies?
True Love is A Stranger →