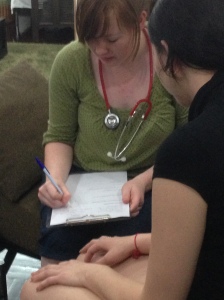 “I know it’s because of all the sex.” The young African woman was referring to the pain in her abdomen. This young woman was one of the last ones to be seen by the doctors that night.  We had a medical team visiting from Ireland and together with a local doctor we had set up a medical clinic in the outreach building. It was midnight and time to close the clinic but she and a friend came in at the last minute to be seen. She whispered that she wants to talk to us some more. She had heard that we could help. The doctor finished his exam, spoke kindly to her and prescribed some medication for her. We gave her hugs and got her phone number so we could follow up with her. Hugging us back, she whispered that we would talk later and left. I watched her go out the door knowing that she was going right back to the harsh reality of sex trafficking. There would be no relief for her physical pain that night, but she left with a smile having been given some hope to hold on to.

Sickness, disease, and injury are huge risks for trafficked women and women in prostitution. They work long hours through the night often having sex with several men a night. Many of the women report violence against them that leaves them vulnerable to further internal damage. Symptoms appear in their bodies but the women rarely have the opportunity to seek medical help. They sleep through the day and there is no time for them to see doctors. If women are trafficked they are not free to access medical help and if they are they do not know where they can go or how to communicate in a foreign language. Most of the time, women in prostitution just cope with the symptoms of disease and illness while deep inside the fear of the unknown grows. Sadly, for many by the time they can get to a doctor the treatment will be costly and long and more than they can bear. This year we have sent several trafficked women home to their countries with symptoms of AIDS, cancer, and parasites. The delay of medical treatment for them has had serious consequences.

One of the goals of NightLight is to address the medical needs of the women who are still trafficked and in prostitution by offering medical clinics quarterly. With a medical team visiting from Ireland, it was the perfect opportunity. We set everything up and prayed that it would go well and that women who are trafficked and those on the streets would feel safe coming in to the clinic. Earlier in the evening a few of us had gone to speak to Lionnel, (manager of Central Asian trafficked women) and invited him to send the women over. He seemed very open and so we were hopeful.

We opened the doors for the clinic and waited. Would anyone come? Would Lionnel trust us enough to send the women over? I was chatting with a colleague when a movement caught my eye. Looking outside the window I saw a group of Central Asian women crossing the street. Lionnel, was leading them. He brought them to our door, saw them in, and then went to get some more. It was exciting to see how the relationship we have been building for the past few years was now giving us an open door to provide assistance.

22 women came in to the clinic for medical exams.  9 of the women were from Central Asia and with our translator were able to communicate their concerns to the doctor. Two African women came in and were also able to talk to someone in English. 11 women were Thai streetwalkers. Most of the women received some medication and we will be following up with others to provide prescription meds. A couple women asked to talk to us later privately about their situation. One of the African women said, “My friends were afraid to come. They said it’s probably just a trick. But, now I’m here and this is really good. I will tell the others.” She later brought a friend who is trafficked and stranded here and we have now begun to the process to help her return home.

Hearing the stories of trafficked women can be overwhelming when it feels like there is little that can be done to help them immediately. We meet so many women every time we go out and while we love meeting them, it’s hard to walk away giving little more than a hug and words of encouragement. Medical clinics allow a very tangible way to meet a serious need of women who are sexually exploited even before we have opportunity to help them get free. Not only do we get to provide much needed physical assistance but we are given a great platform to demonstrate love and to open doors for intervention.

(We would love to work with more medical teams to offer intervention. The costs of providing medical care and repatriation come entirely through donations. If you would like to provide practical assistance through medical care or repatriation, contact us at bkk@nightlightinternational.com or donate online at http://donate.nightlightinternational.com/  specify TW support.) Average Medical Cost if there are no serious issues: $150, Ticket and Overstay: $1600, Living expenses: $40 per week per victim for food